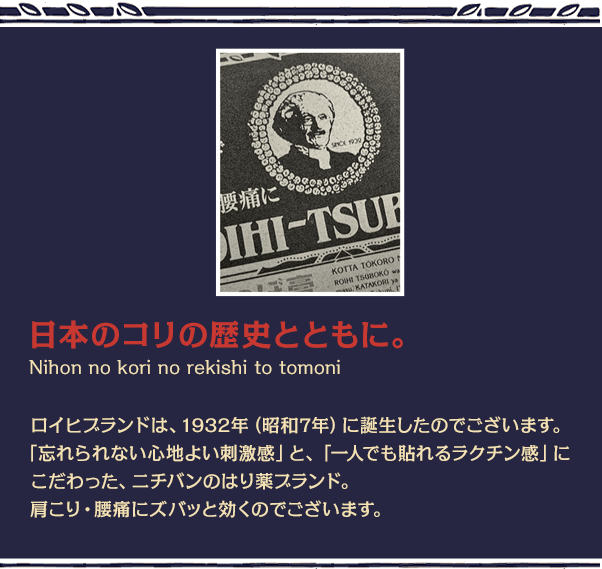 The footprints of shoulder stiffness and lower back pain can be observed in every country of the world. In northern China, stones with pointed ends like needles from stimulating acupressure points have been discovered amongst relics from the Neolithic era. Around 1,000 BC, during the Babylonian period, people would make pastes by mixing together edible plants and water, cinnamon juice, milk, and other ingredients and apply these to the skin. In Greece around the 4th century BC, the father of medicine in ancient Greece, Hippocrates, and his followers are said to have created compresses. Sports were very popular at that time, with the holding of the ancient Olympic Games and other events, and massage as well as compresses and other external preparations evolved.

In the 600s, during China’s Tang Dynasty, there was tremendous advancement in moxibustion and acupressure point therapies. During the Nara period (710?794) in Japan, under the Yoro Code (which was a revision of the Taiho Code of 701), Anma therapeutic massage was actively promoted. Compiled during the Heian period (794?1185), Japan’s oldest medical book, the “Ishinbo” contains entries describing how wounds would heal when herbal medicines broken into fine pieces were wrapped in strips of bamboo and applied to the affected area, and these are thought to be referring to the use of compresses. Furthermore, during the Warring States period (approx. 1467-1568), people began using strips of Japanese paper painted with a mixture of herbal medicines and sesame seed oil.

Fast-forward to 1760. Despite the fact that the burden of human labor lessened following the industrial revolution, there was actually an increase in shoulder stiffness and lower back pain! The reason for this was the decrease in opportunities for people to exercise and strengthen their muscles. Subsequently, the use of motor vehicles became widespread! And sadly, shoulder stiffness and lower back pain were fated to increase as well.

At the beginning of the 1900s, mud packs were created in the United States, and these spread to Japan in the 1970s. Today’s medicinal patches were developed based on these packs, and are now contributing tremendously to the relief of the shoulder stiffness and lower back pain suffered by contemporary humans, for which stress is regarded as being a major cause.

Incidentally, in 1910 Natsume Soseki wrote in his novel “The Gate”, “Pressing with my finger, the area between my neck and shoulder, slightly towards the center of my back, felt as hard as a rock.” According to one theory, the Japanese expression for “stiff shoulders” (kata-ga koru) was originally coined by Natsume Soseki. Prior to the publication of this novel, there was no word or phrase in the Japanese language to express the phenomenon of “stiff shoulders.” It is said that the birth of this phrase led to many Japanese people being able to recognize in themselves the symptoms of the muscles of the shoulder becoming stiff and hard.